Imagine the complete evacuation of Wisconsin’s capitol city and the surrounding Yahara Watershed region. The culture of Saturday farmer’s markets and terrace music is lost after the buildup of toxic cyanobacteria fumes kill thousands and force more to flee the area forever.

This is just one of four scenarios in the Yahara 2070 project—a set of environmental futures posed by researchers at the University of Wisconsin-Madison Center for Limnology that are plausible by the year 2070. 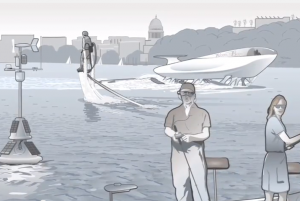 The scenarios, which include only a handful of possibilities, were released in May 2014 and challenged policy makers and citizens to think critically about the environment’s future in Dane County.

“It’s hard for us to really think about the future,” Jenny Seifert, project outreach coordinator, said. “We’re really concerned with what we see in front of us, but when it comes to ecosystems and how we use resources, we need to be thinking far into the future.”

Nearly six months later, Seifert says the team is turning attention toward a fifth scenario—the one that will eventually come to pass in the Yahara watershed.

The Yahara 2070 project, funded by a grant from the National Science Foundation, combines public interviews, storytelling, art, computer modeling and scientific literature to answer the question “what if?”.

Seifert says the team will eventually conduct research to see how this lingering question may be impacting public policy and popular perception of water quality.

However, this research will come with its own set of challenges.

“I think it’s going to be really difficult for us to tease out what changes can be associated with the scenarios because when it comes to policy change and social change, it takes a really long time and many factors go into it,” Seifert said.

For Dane County administrators, using the fictional scenarios to produce tactical changes is a daunting task in itself.

“The scenarios are a research project, certainly, but a more abstract kind,” Management Coordinator on the Dane County Lakes and Watershed Commission Sue Jones said. “One of the things I’ve been suggesting and others in the Commission have been suggesting is a practical, level discussion that we could be involved in related to the scenarios.”

To combat this divide between fiction and reality, Seifert and Jones, along with their respective colleagues, have organized a Watershed Network Workshop to be held on Nov. 19.

The workshop is intended to engage watershed groups in a conversation about the scenarios and whether there is a different scenario—a fifth scenario—that Dane County can create and move toward, Jones says.

While these discussions will continue outside the workshop, Jones says there are already considerations pending for the 2015 Dane County budget, expected to be released by the end of November.

Instead of investing in expensive technology upgrades, treatment plants can pay primary sources of phosphorus, such as farms, to keep the nutrients from running off into streams and lakes—ultimately, a cheaper option.

Right now, the pilot program is being conducted in the Sixmile Creek Subwatershed but is expected to lead to full implementation throughout the entire Yahara Watershed by 2016, according to the MMDS website.

“That [adaptive management] is where a lot of the County coordination and close work is happening right now,” Jones said. “There’s a great deal of collaboration and financial participation in it, which is pretty exciting. “

Seifert hopes to see this same open dialogue and collaboration as the Water Sustainability and Climate Project begins impact research on the Yahara 2070 scenarios.

The project has two years left on the five-year grant, making it difficult to predict when and to what extent the team and community will be able to visualize a fifth scenario.

But Seifert believes that whether or not the project is refunded, there is still value in it’s creation.

“It’s not a matter of just throwing the scenarios out there,” she said. “Hopefully the research, as a set of knowledge that is made public and accessible, will influence how we manage our land and water.

Explore the scenarios at Yahara2070.org