In August, the city of Toledo held a three day ban on drinking water following a phosphorus contamination caused by blue­green algal blooms in Lake Erie. According to the Department of Natural Resources, phosphorus poses a problem by fueling blue­green algae growth, or cyanobacteria, which can cause stomach cramps, headaches, fever, vomiting and diarrhea to those exposed. While researchers and water utility specialists in Wisconsin are not concerned with the same type of problem occurring in the state, they are monitoring the situation closely.

Green Bay Water Utility General Manager Nancy Quirk said that the algal blooms, a major factor in the Toledo event, are not a big concern for cities who get their water from Lake Michigan due to differences between the lakes. Lake Michigan is much colder and deeper than Lake Erie, and the location of water intake is not close enough to the shore to be affected by any possible algal blooms.

“I wouldn’t want to say we’re never worried, but Lake Michigan’s a very big lake and it gets diluted,” Quirk said. “The lake is also much colder, especially where our intake is at the bottom, we’re not getting very warm conditions for bacteria to grow.”

Steve Elmore, chief of public water supply at the Department of Natural Resources, said while it is not a major concern, it is always on their radar.

“This is a big issue for us, and we’re tracking it closely with what’s going on in Ohio [in order] to be on the same page about what’s needed in both our states,” Elmore said. “As we move forward I think we’re going to be looking at more monitoring and making sure the treatment we have in place is being optimized.”

Another element setting Wisconsin apart from Ohio is the significant enhancement of water treatment on Lake Michigan since the cryptosporidium outbreak in Milwaukee in 1993. Milwaukee Water Works Superintendent Carrie Lewis said the new primary disinfectant process that Milwaukee uses is ozone, a powerful oxidant that kills most toxins and breaks down many organic molecules that may contaminate the waterways. 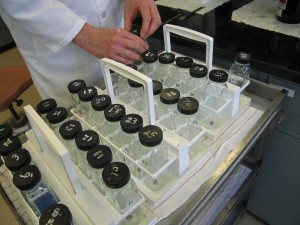 “Nobody does it quite the way that we do, and part of the reason for that is you would not generally put ozone first unless you had a very pure water source, which we do,” Lewis said.

Water intake for both the Milwaukee and Green Bay utilities reported that both are far enough offshore that algae blooms and agricultural runoff are not really a concern, with intake in Milwaukee being a mile and a half out, and Green Bay 13 miles out.

“We have a commitment to our customers that we will be open and share any information that we have about water quality,” Lewis said. 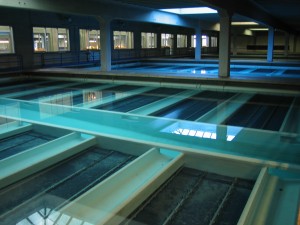 All of the monitoring done by Milwaukee Water Works is available to the public and can be found on their website.

Todd Miller, an assistant professor at the University of Wisconsin­Milwaukee, said the the only Wisconsin lake that may run into potential issues with blue­green algae blooms is Lake Winnebago, where water conditions are close to those in Lake Erie. Lake Winnebago serves over a quarter of a million people with drinking water in the cities of Oshkosh, Neenah, Menasha and Appleton.

Miller is in the middle of a five year study on Lake Winnebago funded by the National Institute of Environmental Health Sciences focused on algal toxins in Lake Winnebago and the associated drinking water. Miller says the lake experiences a fairly high production of algae every year in the form of cyanobacteria. The goal of the study is to identify environmental factors that lead to the production of these toxins, as well as look at how well the water treatment processes remove the toxins.

Even with these similar conditions, Miller admits that while a Toledo situation is possible, it is still unlikely. 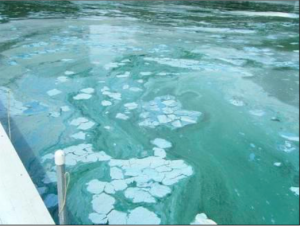 Algae found on Lake Winnebago. Courtesy of the DNR.

“Our drinking plants employ some treatment processes that are a little more advanced and make it less likely that that kind of event would occur around cities in Lake Winnebago,” Miller said. “Those treatment processes are ultra­violet radiation treatment, or ozonation, and those strategies were not employed at that drinking water plant in Toledo.”

The biggest source of the nitrogen and phosphorus pollution comes from nonpoint sources. According to the DNR, nonpoint sources (NPS) are the leading factor in water quality problems in the state, is caused by rainfall and snowmelt that carries runoff such as fertilizer to various bodies of water. Many utility workers and researchers agree that if the state could do one thing better, it would be to regulate NPS pollution.

The point sources of discharge into the surface water bodies are regulated, but the nonpoint sources are not, which is where most of the phosphorus is coming from.

“It’s coming from runoff from agriculture and farms and whatever is upstream, and all of the ways to reduce those contributions to the watershed are all voluntary,” Lewis said. “We need to make more people do it voluntarily or get a bigger stick so it’s better controlled.”

Miller agrees, but thinks the process of regulating NPS is easier said than done because there is very little policing of NPS.

“Of course we don’t want to attack farmers, we want to help farmers, but perhaps that’s not a politically advantageous thing to demand that farmers reduce the amount of runoff coming from their land when they don’t necessarily have the money to develop the necessary procedures,” he said. “All those things would put a burden on farmers and we need to help them do that, but at the same time we need to keep those regulations in place, both at the federal and state level that really demand that people have the resources to police farmers and to help them with their nonpoint source pollution reduction efforts.”

Graduate students at the University of Wisconsin­Milwaukee recently completed a comprehensive assessment addressing the issue of pollution from nonpoint sources. Under the direction of professor Sammis White, the students made recommendations to the DNR on ways to reduce phosphorus runoff from agricultural lands. 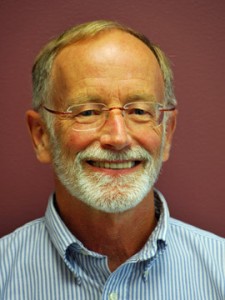 Two of the teams of students recommended the DNR go further with their development of trading credits for phosphorus reduction, which would pay farmers for maintaining low levels of phosphorus runoff. The farmers would be paid by waste water treatment plants, who then in turn wouldn’t have to invest hundreds of millions of dollars to get the same level of phosphorus in their particular watershed.

White agrees with Miller; the focus should be on assisting farmers, not attacking them. This proposed solution would be an alternative to putting the financial burden on farmers to find ways to reduce the levels themselves.

“The farmers care about clean water but they care more about making a living, so if they were going to be heavily regulated and told to do things it would not go over well, nor would expensive alternatives,” White said.

Lewis believes while Wisconsin seems to be in good shape in terms of water treatment and quality, keeping our water clean requires effort from everyone.

“If you don’t put stuff in the water in the first place, we don’t have to take it out.”