You may be astonished to find large expanse of greenish patches and scums floating on Lake Mendota when you are walking by the lakeshore on a cozy summer afternoon, hoping to get invigorated by the fresh breeze from the lake, but those greenish patches are part of a large health concern.

Those patches and scums are actually blue-green algae, technically also known as Cyanobacteria. Although they are microscopic organisms naturally present in Wisconsin lakes, streams and ponds at low levels, according to the Wisconsin Department of Natural Resources, they can be highly toxic to both humans and animals.

“They are photosynthetic bacteria that are a normal part of the aquatic ecosystem, but when the growth becomes very massive, we call it bloom,” said Kirsti Sorsa, Program Manager of Public Health – Madison – Dane County. “There are some concerns about the blooms obviously in the lakes here.”

These tiny microorganisms can proliferate dramatically into an algal bloom with excess nutrients when it is warmer in the year and emit toxins that are fatal to both humans and animals. Cases of animal deaths connected to blue-green algal blooms remind people of getting themselves and their pets away from the water when there is a blue-green algae bloom.

“Actually the major factor that causes blooms to occur is the phosphorus pollution from manure,” Carpenter said. “One more thing I need to mention is that Cyanobacteria blooms get worse as lakes get warmer. So warmer surface water is also going to contribute to bad water quality.”

Blue-green algae has been in Wisconsin for hundreds of years, but excess phosphorus loading to Madison lakes in recent years has provided the algae with extra nutrients to grow relentlessly, according to Sue Jones from Dane County Land and Water Resources Department.

“More recently, as we’ve added nutrients to our waters, those nutrients have fed the algae, and we are concerned with blue-green algae because it can cause a toxin to be formed,” said Jones.

According to Kathryn Van Gheem, Watershed Engagement Coordinator at the Clean Lakes Alliance, weather conditions that can have an impact on algal bloom formation include temperature, wind, wave patterns and sunlight availability.

“It does vary depending on the year but it does seem like you get most blooms when it’s warmer during mid-June through like September,” Van Gheem said. “You will get an occasional algal bloom during lake turnover when you get nutrients coming back up from the deeper cooler waters, becoming available on the top and then you have an increase in temperature observed.”

Although not all algae species are toxic, large and unsightly blooms with a high density of blue-green algae can emit various toxins that, when ingested, can cause severe damage to liver, gastrointestinal or neurological systems of human and animals, which can even lead to death, according to the Department of Health and Family Services.

“It can cause various sorts of illnesses or symptoms among people, and it can even be fatal to animals,” Sorsa said. “We have known animal deaths since the 1800s.”

According to a 2013 study in the journal Toxins, blue-green algae blooms had killed more than 200 dogs and caused non-fatal poisonings on 150 dogs in the United States from 1944 to 2012.

In Madison, cases of dog deaths and even a teenage death after exposure to blue-green algae blooms have upset the public. In 2008, two dogs died very close to each other, rapidly after they had swum into the blue-green algal scum, Sorsa said.

The State Lab of Hygiene also documented a teenage death connected to blue-green algae bloom in the summer of 2002. The teenager went swimming in a blue-green-algae-covered pond with his friends and died from heart failure 48 hours later. The young victim suffered seizures before death, and one of his peers got a stomachache and diarrhea but did not die.

The Dane County coroner suggested that the teenage most likely died from ingesting toxins released by the blue-green algae when swimming in the lake. “There is a pretty strong connection between those deaths and blue-green algae blooms,” Jones said.

There are varying symptoms, mostly symptoms of liver, gastrointestinal system and nervous system, if a person comes into contact with blue-green algal scums and ingests the toxins, Van Gheem said.

“Something like a stomach cramp, diarrhea, vomiting, rashes, headaches, muscle weakness, difficulty in breathing,” Van Gheem Said. “ Those are all examples of what potentially could happen in humans.”

According to Dr. Jordy Waller, veterinarian at Spring Harbor Hospital, symptoms on pets, in most cases dogs, can even be more fatal, because blue-green algae can cause liver failure, which is a very dramatic illness of dogs and usually progresses to death.

“Usually dogs that ingest blue-green algae and have toxins effects from it will be very lethargic,” Dr. Waller said. “They’ll be vomiting. They can have diarrhea and neurological symptoms like not being able to stand up.” 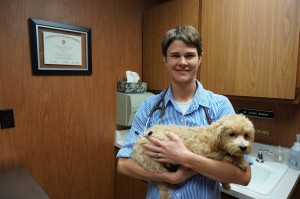 Although not all pet owners in Madison understand what blue-green algae bloom is, most of them are very cautious about taking their dots to swim in the lake when algal mats cover the water surface.

Kathy Gall, owner of a 10-month old pit bull, said she had never heard about any cases of dog deaths from blue-green algae bloom, but she knew it is toxic and would not let her dog to swim in the lake when she saw algal scums floating on the water.

However, if pet owners find out there’s a blue-green algae bloom in a lake after their dogs have swum in it, Dr. Waller recommended that the pet owners should go to their vets and have their dogs’ blood work done to make sure the liver value are all normal. If their dogs are having symptoms, they should go to the emergency clinic as soon as possible.

Sorsa also recommended pet owners to clean up their dog very well so that they don’t lick the toxins off their fur.

“Contact the vet, potentially the Poison Control Center too,” Sorsa said, “Watch for the symptoms. Some of the symptoms occur within 15 to 20 minutes. So you need a very rapid response.”

If anyone or their pets are suffering health effects caused by blue-green algae, both Sorsa and Jones recommend them to visit the Department of Health Services webpage http://www.dhs.wisconsin.gov/eh/bluegreenalgae/ and report a case, or they can also call the Bureau of Environmental and Occupational Health at 608-266-1120.