A state divided stands only as strong as the frac sand or groundwater beneath the feet of those who desire those very resources.

Wisconsin, the country’s Dairy State, stands divided by east and west in the land use practices of each region, a division which is correlated to the geologic features that separates the state into the driftless area and the glaciated region.

While the state’s eastern flat lands lend themselves to high-density agricultural purposes, the hills and valleys of the west, as well as the sediments buried within those hills, have led to an increased demand for its use in frac sand mining, Ken Bradbury, hydrogeologist at University of Wisconsin-Madison’s Department of Geoscience, said.

Bradbury said the ground in the east makes it susceptible to contamination from the surface. Beneath the thousands of cows at industrial farming facilities, the ground is made up of dolomite and sandstone. Though softer than the shale of the west, fissures in the stone allow for rapid absorption of surface-level contaminants, Bradbury said.

Dairy producers are attracted to the area where natural breezes keep the temperatures more comfortable to cows, so they produce more milk, Bradbury said. The heavy production of manure is stored and used in agricultural land spreading, he said. 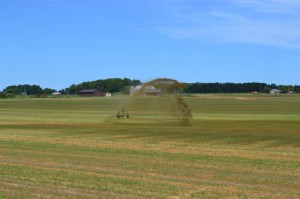 This has led to controversy, as the industrial dairy agriculture business grows in Wisconsin’s eastern region.

In the Dairy State, industrial agriculture has a powerful voice. But the environmental and health impacts of Concentrated Animal Feeding Operations, or CAFOs, have long brought contention to communities in Wisconsin, and with the Kinnard Farms court decision, action is being taken to protect the state.

The case, currently being appealed by Kinnards Farms, decided that the permits for expanding the CAFO, which were being challenged by local residents, would be allowed but with new limitations. The operators of Kinnards Farms would be required to monitor the nearby groundwater and the Wisconsin Department of Natural Resources would have to impose a limitation on the number of animal units. Currently, the DNR defines a CAFO as an animal feeding operation of 1,000 or more animal units.

According to the case document, the issue of the abundance of waste from this CAFO results in public health problems from water contamination.

One local beef farmer who testified against the expansion, Lynn Utesch, said the number of animal units has a direct relation to the land, water and air pollution that is released and stricter regulations to limit the expansion of these farms would highly benefit the surrounding communities.

“The Kinnards don’t want an animal cap,” Utesch said. “With an animal cap, they can’t just continuously expand without any check on what they’re doing.”

Kinnard has argued the decision is outside what should be required under law and puts them at a competitive disadvantage to other operations, Harbaugh said. She said the state is at a point where CAFOs are expanding so rapidly that the law has not yet caught up with the reality, despite the data on how the waste is disposed, and the impacts it has on groundwater.

“Meanwhile, all this poop is getting in the water and nobody is taking responsibility for it,” Harbaugh said. 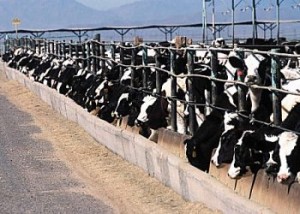 Kinnard Farms petitioned to the secretary of the DNR to override Judge Boldt’s decision, but were told it was not within the secretary’s authority to do so. The case was then appealed to Circuit Court.

“The fight will go on for another day, we have to see if the circuit court will take this deal,” Harbaugh said. “We can’t have an industry completely destroy our water in the name of short-term profit. It’s not working.”

Meanwhile, the western parts of Wisconsin experience continued conflict over frac sand mining that, similarly to controversies in the east, intertwine themselves in health, environment and policy.

The western landscape of Wisconsin, in contrast to the east, was never glaciated and so has more hills and valleys than the more agricultural flat lands, Maureen Muldoon, hydrogeologist at UW-Oshkosh, said.

Bradbury said while there are still some exemptions, the soil quality along with the nature of the hilly landscape, make the west less usable for higher-density, industrial agriculture that is more highly concentrated in the east.

The nature of this landscape lends itself to the mining of frac sand because of the easier access, she said.

“Think about a landscape where you have lots of hills and valleys, imagine it as a stack of books,” Muldoon said. “The river valley is cut down in and you can see all the book layers whereas if it were just flat you would just see the top book.”

The mining in this area has caused conflict between legislators who seek to grow the job opportunities provided by these facilities and residents who experience the negative environmental and health effects of the mines, Muldoon said.

Bradbury said the environmental concern is rooted in the destruction of the landscape.

“It has a big effect on the way the landscape looks,” Bradbury said. “You’re starting with a nice hill and by the time you’re done, the hill is gone. Literally, gone.”

Beyond the aesthetic, frac sand mining leads to water contamination from runoff into rivers as well as respiratory illnesses from the silica dust that pollutes the air, Shahla Werner, spokesperson for Sierra Club, said. 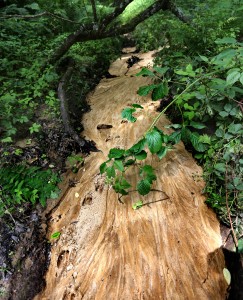 She said the impact on local communities is not often considered in the decisions to mine because of the lack of strict zoning laws in the more rural areas. She said having mines near a residential area or a school is often overlooked.

“Impact is falling on local communities while the frac sand mine is not really paying their fair share,” Werner said. “They’re getting all the resources, destroying the habitat, profiting and not compensating the locals fairly.”

January will see the return of the proposed bill for removal of local control for local mining, which gives greater power to State government to override local government’s ability to limit mining practices.

Werner said Sen. Tom Tiffany, R-Hazelhurst, plans to introduce this legislation as soon as the session starts again, which she said she thinks would most likely be fast-tracked in the state’s current political climate.

“There is a reason the miner appears on the state flag. Mining has been a core industry creating jobs in Wisconsin dating back to statehood in 1848,” Tiffany said in a statement.

During the gubernatorial election’s second debate, Gov. Scott Walker spoke out in support of the economic boost mining facilities have brought to the state, and would try to do more in regulations to keep the mines legally operating.

“Thanks to God and the glaciers, we have some of the best frac sands in the world,” Walker said.

With Wisconsin’s booming frac sand industry and the push for jobs during November’s election, it made sense that Walker would stand behind the mining. His policies extend beyond campaign promises, however. In the past year, the DNR has grown in its capabilities to require groundwater monitoring and high capacity wells, which are part of allowing mining and processing sites to legally operate.

Yet, the opposition from local residents continues to spark controversy over the rails that transport them, the air and water which can be contaminated from them, and the economic side effects that they face with changing property values.

Both east and western parts of the state rely on maintaining a balance between the economy-boosting industries of mining and agriculture and the regulations that keep communities healthy and safe from groundwater contamination, Werner said.

Wisconsin has been responsive to national demand for fracking itself in providing the mined sand, as well as in following national trends of a rapid expansion and increase of CAFOs, Werner said.

“The [local communities] should be able to develop rules and standards that are more appropriate for their geologic setting,” Muldoon said. “State level legislation really ties the hands of local governments to try to develop laws that are specific for their area, and I think that’s where the problem lies.”

Yet, laws are gradually creeping up on the expansions of each industry. Court cases in the past year expanded the DNR’s power to require groundwater monitoring as well and effects of high-capacity wells.

Conclusions from the Kinnards Farms case could result in even further state-wide regulations, Harbaugh said, which would, to some extent, further seal the gap between industrial growth and legislative restrictions.