As Casey Kavanaugh and a few of his friends walked into a local establishment, the other customers couldn’t help but notice the aroma that came in with them.

The group had just spent the day kayaking around Madison’s lakes, and as they paddled back through Lake Mendota, they decided to stop for a break.

“We walked in there and people were like, ‘Boy, were you guys sitting in sewage all day because you just reek,’  and we were like, ‘No, we’ve been swimming on the lakes,’ and they were like, ‘Oh yeah, I guess that’s the same thing.’ People can tell when you’ve been on the lakes you know, there’s a certain stink to it,” Kavanaugh said.

Lake Mendota is a hot spot for recreational activity year round, drawing sailors, canoe and kayak enthusiasts, divers and swimmers to its waters. 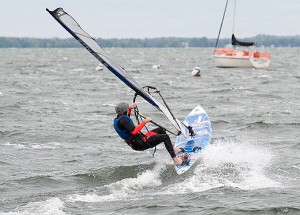 But the lake is plagued by high phosphorous levels, invasive species and toxic blue-green algae blooms. The issues have been cause for some recreational enthusiasts to re-assess their activity in the lake, but so far not enough to shut down the fun the lake has to offer.

Even so, those who come to enjoy the lake are cool to the quality of the water, which is often murky.

Matt Blasinski, a dive master for Hoofers, a student-led outdoor recreation organization housed in the Memorial Union, said Lake Mendota’s dirty water is something that has tangible effects on his sport.

He said the main concern is visibility. In an ocean dive a person could expect to see anywhere from 50 to 100 feet, but in Lake Mendota divers consider it a good day if they can see more than two or three feet. That distance decreases even further in the summer.

That kind of low visibility is often due to algae, weeds or other nutrient particles floating through the water and can bring serious issues to advanced and beginning divers alike.

“It’s kind of rough to dive in but we still do classes and that. It makes it really hard for an instructor to be able to supervise a lot of people at once, so you know we have to do smaller classes,” Blasinski said.

Madison triathlon enthusiast and coach Bill Martin, 28, feels the effects of dirty water on his sport as well. When training for the swimming segment of triathlons, Martin says the dirty water can have some health implications and even stop him from swimming in the lake as often as he would like.

Martins says he feels the effects of lake water on his sinuses after swimming in the lake – never to the extent of a diagnosed sinus infection, but he says he feels stuffy and congested for a few days afterward. These effects have caused him to limit his swimming in the lakes to only once a week generally. Martin has seen the effects of dirty water on other Madison triathletes as well.

“I know triathletes who maybe take in more water than I do, they’re maybe not as comfortable swimmers, and they’ve gotten a little bit sick sometimes,” Martin said. “And it’s hard to pinpoint it exactly on the lake, but if you have a group of 20 swimmers and three of them get sick the next day, all the same thing after you just swam in the lake, it’s at least likely.”

A bigger concern than just murky water is poisonous blue-green algae in the lake, which often forms in shallow and still water, toxic to both humans and animals.

For outdoor recreation director and Hoofer Clubs adviser Jacob Hahn, dirty water in the form of poisonous blue algae blooms has an adverse effect on business.

The club rents various water crafts like sailboats, stand-up paddle boards or windsurfing sails and boards, and these rentals are forced to shut down when blue-green algae blooms occur.

“If the levels of blue-green algae are too high, we cannot offer sailing lessons [or] youth camps or any paddling rentals to club members/customers until the algae dissipates…All we can do is wait for environmental health and safety to do their appropriate tests and clear us for operations once the algae has subsided,” said Hahn.

Hoofers isn’t the only thing that shuts down due to blue-green algae blooms – a study by the Wisconsin Center for Investigative Journalism cites nine beach closings on Lake Mendota in 2013 due to the algal blooms.

Despite the the ability of Mendota’s dirty water to tamper with water lovers’ activities, these same recreationalists refuse to let poor water quality completely stamp out their fun.

“Unless there is an algae bloom happening at that moment, I go in the water,” said Elizabeth Katt-Reinders of the Clean Lakes Alliance.

For Blasinski as well, dirty water doesn’t stop him or other Madison scuba divers from diving and teaching in the lake.

“We go diving a lot. Some people are afraid they can’t go diving around here, but Hoofers and local shop instructors offer classes really year round and we take you out on the lakes when it’s warm enough,” Blasinski said. “So don’t be afraid of it. The lakes are used pretty well and not abandoned.”