What many think is Milwaukee’s economic future lies near 247 Freshwater Way, where a warehouse built in 1904 is now home to numerous water technology companies and research.

The seven-story Global Water Center, opened in 2013 in Milwaukee’s south side, ran out of room for tenants five months after opening. But in the coming years, it will be joined by a 17-acre “water technology park” for water companies and researchers to innovate, helping the world deal with water management and quality problems while potentially providing a major boost to Milwaukee’s economy.

This is all part of an effort to transform Milwaukee into “the Silicon Valley of water technology.” Backers of that effort say it’s a natural move for the city, one that sits on three rivers and is next to Lake Michigan — and a city whose early growth came from the breweries, tanneries and meat packers that depended on the city’s vast amounts of water to thrive.

“You’ve got a confluence of factors here: a history of water technology and a time when water is becoming a major issue in the world,” said Richard Meeusen, CEO of Badger Meter. “Those two things coming together create an opportunity for us, and we can seize that opportunity or we can ignore it. We chose to seize the opportunity.”

In 2007, Meeusen co-founded the Water Council with former A.O. Smith CEO Paul Jones, gathering Milwaukee business and education leaders to work together and make Milwaukee the global leader in the water technology field. Eight years later, it’s a work in progress, but the city has already made a big jump in becoming a water technology hub, supporters agree.

“When I travel around the world, and I deal with people in the water industry, they all know the name ‘Milwaukee’ now,” Meeusen said.

The effort has gotten recognition from publications like The Economist, Forbes, The Atlantic and Governing. It’s also backed by two-time election rivals Gov. Scott Walker and Milwaukee Mayor Tom Barrett, although Meeusen pointed out Milwaukee’s success so far has come because government has played a supporting, rather than leading role.

The Wisconsin Economic Development Corporation, for example, is providing $50,000 in funding for startups to participate in an accelerator program. The program graduated its first five businesses last year, and a second group of startups took their place in the $22 million Global Water Center, WEDC spokesman Mark Maley said. 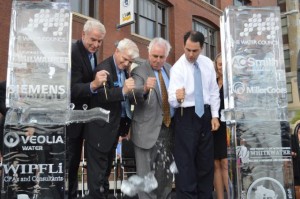 Gov. Scott Walker and Milwaukee Mayor Tom Barrett, who ran against each other twice, celebrate the opening of the Global Water Center. Photo courtesy of Gov. Walker’s office.

Achievements along the way for Milwaukee include the United Nations’ 2009 designation of the city as a Global Compact City, a UN program that seeks to boost innovations that could solve world problems.

“Milwaukee is fast establishing itself as a World Water Hub working across every aspect of water to build a new economic base for its region, to improve the local environment and water systems and to enhance the community’s quality of life,” the UN program’s website notes.

The Water Council, which includes more than 150 companies and more than 100 researchers, has gotten international awards for its work, and the International Water Association hosted its board of directors meeting in Milwaukee last summer.

Along with numerous federal and private grants, other accomplishments include the 2009 launch of University of Wisconsin-Milwaukee’s School of Freshwater Sciences, the first of its kind nationwide. A few minutes away, Marquette University now has a water law program, and UW-Whitewater has a water business program, which Meeusen said has helped attract talent to the area.

That’s not to say the efforts don’t have its critics, the most vocal of which has been UWM history professor Marc Levine, who founded the university’s Center for Economic Development.

Levine did not respond to interview requests but wrote in a 2009 paper that “the rhetoric of Milwaukee water boosters … has been riddled with spurious claims.” He also raised concerns over the funds that have gone into these efforts, including to UWM’s School of Freshwater Sciences.

“The scenario of a UWM-driven ‘Silicon Valley of water’ in Milwaukee verges on fantasy,” Levine wrote. “But it is not an innocuous fantasy; it is one that threatens to misdirect considerable public and private economic development and educational resources in Milwaukee.”

Meeusen dismissed Levine’s concerns and said Milwaukee’s accomplishments in recent years proved Levine wrong. He also dismissed Levine’s more recent criticisms that water industry jobs being created are not the low-skill jobs that many of Milwaukee’s unemployed need, saying the effects of economic growth will be felt across the city.

Sammis White, a UWM urban planning professor who heads the university’s Center for Workforce Development, responded to Levine’s concerns by asking, “Do you have another solution?”

“We don’t know the extent to which this is going to work,” White said. “It’s resonating. We’re able to make things happen. We’ve taken a number of steps which, I think, will make this a growing industry. Will it exceed and create 20,000 new jobs in the next 10 years? That’s asking too much, but it is creating collaboration, cooperation, problem solving [and] new technology companies wanting to locate here.”

“Milwaukee is sort of saying, ‘Here’s an area where we have expertise. It’s an area where there’s demand far outside our region. Let’s see if we can build on this,’” she said. “And that’s exactly what regions that have been successful have tried to do.”

Although it seems like a competition with other cities and countries to become the world’s leader, Meeusen said that’s not the case.

‘I’ve got no problem if [other places] want to be a water technology center because there’s no shortage of problems,” Meeusen said. “There are all kinds of water problems that need to be solved. It would be very stupid of us to say, ‘In Milwaukee, we’re going to solve the problem of global warming, and we’re going to do it all by ourselves, and nobody else can work on it.’ That would really be stupid.”

But Milwaukee does have some potential to become the leader in the field, said Charles Fishman, the author of “The Big Thirst: The Secret Life and Turbulent Future of Water.” He said that’s thanks to the School of Freshwater Sciences, the amount of water Milwaukee has available and its history of innovation, as well as the unique collaborations between business, government and education leaders in the Water Council.

Fishman said, however, it will be a major challenge for Milwaukee to become the global leader, if there even can be one. But, he said, “There would be nothing wrong with being two steps short of being the Silicon Valley of water.”