Turn off the faucet while you brush your teeth and take shorter showers.

The general student population may have a grip on those methods to reduce water, but not as many would think eating less almonds does much to conserve water.

That’s one place where Luke VandenLangenberg sees an information gap on campus regarding water conservation. Hidden water refers to the vast amount of water resources used to make food or other products, ranging from how almond trees or even t-shirts use an exorbitant amount of water in their production.

Half of the battle is getting the information and then getting it out there, while the other half comes down to action. We Conserve, in partnership with the Office of Sustainability, is a UW-Madison program dedicated to conservation and waste elimination, according to its website.

Be it cutting down on leaks, more efficient building design or a host of other methods, UW-Madison reduced its daily water consumption by 41 percent between 2002 and 2008, according to the We Conserve website.

But the battle continues.

“Water is going to be the next big war,” We Conserve member Aaron Conradt said. “It’s so scarce and it’s such a rich resource. We just don’t charge enough and people aren’t informed enough about the importance of it. We cannot live without it.”

We Conserve members are still working to collect information, spread it to the campus population and make a change to conserve water.

In the spirit of efficiency, thorough research to know exactly where the problems lie help guide sustainability efforts.

One such effort stems from the Sustainability, Tracking, Assessment & Rating System. The STARS website describes the program as a “transparent, self-reporting framework for colleges and universities to measure their sustainability performance.”

UW-Madison is one of 680 STARS Reporting Tool-registered institutions  and also one of 508 in that group who are Association for the Advancement of Sustainability in Higher Education members.

We Conserve has been assisting the Office of Sustainability in this project.

“We are trying to document where water is used, where it goes, how sustainable are we with our water, what’s our impact,” VandenLangenberg said. “[The Office of Sustainability] is trying to do a really detailed job.”

Conradt cited one example, the Charter Street Heating Plant, as an entity with a “huge water draw.” Water reuse from the cooling towers was one method he suggested for making the plant more sustainable.

“Once those numbers are released, hopefully there will be a change to really implement daily water lifestyle choices,” Conradt said.

Cartoons and classes: getting the word out

Walking through Bascom Hall or other campus buildings, students might have noticed different cartoon posters from We Conserve. 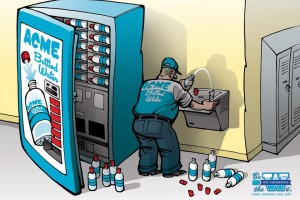 Comics similar to this are posted throughout the UW-Madison campus near water-filling stations. Photo courtesy of We Conserve.

Some cartoons, located above water fountains, display how the use of reusable water bottles over purchasing and repurchasing plastic water bottles is an environmentally and logically better choice.

The marketing efforts attempt to reach the student population and send the message that cutting down on plastic water bottle usage is the smart choice.

“The cartoons are there to help educate around the campus with active and engaging visualization pieces,” Conradt said.

Taking a plastic water bottle and filling one-third of it with oil illustrates the amount of oil it takes to make that bottle, according to VandenLangenberg.

Along with the marketing efforts to increase awareness, the university has been expanding classes and programs to strengthen sustainability education.

Recently, UW-Madison has offered a sustainability certificate. The new 12-credit area of study finishes with a course specifically aimed at exploring a sustainability issue directly on campus.

VandenLangenberg said the classes, but more specifically the posters, are there to “get people to think.”

However, without collective thought, there can be no collective action.

Once the last I’s are dotted in the research, and the messages are being sent to the surrounding population, what remains is the action itself to produce change. 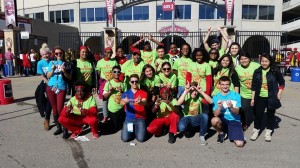 Conradt and VandenLangenberg both stressed the importance of changing our daily lifestyles that involve reckless use of hidden water, like with almonds.

“I try not to just buy straight up almonds, because 82 percent of almonds come from California or are grown there and they’re in a drought. Almond trees take up a lot of water,” VandenLangenberg said.

Around campus, students have also seen an increasing amount of water-refilling stations over the years. The motion sensors and the meters that track how many plastic bottles have been saved both inform and add incentives for passersby to use them.

Plastic bottles, the food we eat and even the clothes we wear all involve water usage.

“The average student needs to really think about more than just the water that is actually water they’re consuming,” Conradt said. “The products that we use and our lifestyle choices really have a huge impact on water.”

In efforts to involve the general campus population, We Conserve has been pushing its pledge program, where students, faculty, staff or anyone else who signs up checks boxes committing to specific goals of a more sustainable lifestyle.

VandenLangenberg said the pledge system helps in establishing a culture of sustainable living. This can start right when students arrive on campus, where We Conserve members passed out cards to redeem free Ian’s pizza to incoming freshmen who made their pledges.

We Conserve is doing its part in recruiting campus members to think about conservation and change wasteful lifestyle habits.

If water is indeed the next big war, it is going to need its soldiers, reusable water bottles and all.