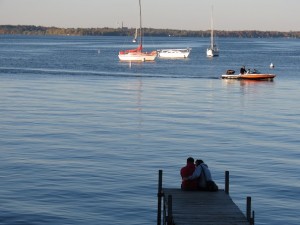 When invasive species get into Lake Mendota and other lakes across Wisconsin, their negative effect on water quality can be detrimental. But once these species are in a lake, getting rid of them is next to impossible so the Department of Natural Resources focuses on public education to prevent the spread.

One local boater, Don Nelson, noticed the area where he launches his boat has problems with algae and weed growth.

“I go out on Lake Mendota 15 to 20 times a year. I launch by Picnic Point at the University,” said Nelson. “It’s an area where there’s quite a bit going on with algae and milfoil growth.”

According to the National Invasive Species Information Center, invasive species “are plants, animals or pathogens that are non-native (or alien) to the ecosystem under consideration and whose introduction causes or is likely to cause harm.”

One of these species affecting Lake Mendota is the spiny water flea.

“The spiny water flea is one of the invaders we are very concerned about, and we’re already seeing damage to water quality from the spiny water flea,” said Steve Carpenter, director of the Center for Limnology at the University of Wisconsin-Madison.

The species, first found in Lake Mendota by a group of undergraduate limnology students in 2009, is not the only invasive species affecting Lake Mendota.

The Eurasian water milfoil is an invasive plant. This plant is found in all lakes in the Yahara Watershed and is problematic because it can grow up to 15 feet.

“It grows and grows until it reaches the surface, and it keeps growing until there’s a blanket of it on the surface,” said Susan Knight, a research scientist for the Center for Limnology who studies Eurasian water milfoil.

As this plant continues to grow, it causes problems for recreation. The plant can get caught on boats, as well as make it difficult for fishers to see and catch their fish, according to Knight. Additionally, swimmers may not want to swim through the weeds.

“When it comes in, you can lose a lot of plants. It will crowd out other species,” Knight said. “It can become the only plant there and discourage any kind of variety, creating a kind of one species environment that isn’t conducive to biodiversity.”

Boat users and fishers notice this plant when using the lakes. Tanner Blaschka is a senior at UW-Madison and a member of the UW Fishing Team, an organization of students who share the love of fishing. Blaschka has found invasive plants make some areas too choked with weeds to fish.

“Weeds are typically good for the fishing, but invasive species can overtake the lake and create more problems for the fishery,” Blaschka said.

Blaschka also said that these plants and weeds can be found on boats following lake activity.

“It’s definitely not uncommon to see weeds on certain parts of the boat like the prop or hull when we are leaving the lake,” said Blaschka. “I always make sure to check my boat when leaving the lake to make sure I am not transferring any invasive or exotic species to the next lake I travel to.”

One local boater has experienced problems with his boat due to the milfoil.

“I’ve had problems where the boat would overheat because the intake was clogged with the weeds,” Nelson said. “It’s gotten worse in the past couple years. I’ve never had the problem until a year or two ago.”

Since these species cause problems, there are various efforts to try and get rid of them. The problem with the spiny water flea is that there is no current way to get rid of them.

“Unfortunately with a lot of invasive species, once they’re in, they’re in,” Carpenter said. 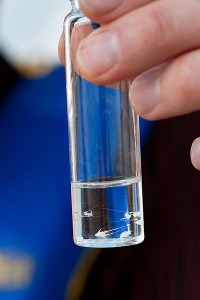 As for the Eurasian water milfoil, Knight is researching different ways to control it. Pulling the milfoil out can be effective, but it has to be pulled out at the root by hand, according to Knight. One potential way to pull out the milfoil more efficiently is by harvesters.

“Harvesters are boats with something basically like a lawnmower on the bottom. It cuts and pulls it along a conveyor belt. When it gets really bad they will use this,” Knight said.

Most of Knight’s research focuses on a weevil that eats northern water milfoil, the native milfoil species. This research program’s goal is to get more of this weevil into the lakes so they will eat the Eurasian water milfoil. At this time, it is very expensive and studies are being done on its effectiveness.

“When it came in, it started eating the Eurasian water milfoil. We want to beef up numbers of weevils and put them back out in the lake,” Knight said. “It’s done in many parts of the country but results have been spotty.”

Sometimes there is not much people can do to get rid of invasive species once they get in the water. The DNR and other local activist groups put a lot of focus on public education. According to Carpenter, the major tool for preventing the spread of invasive species is educating boaters.

“Getting the word out, this is what the invasive species looks likes, here’s how it is spread and here’s what you can do to stop it. Surveys show public education actually works,” Carpenter said.

As a local boater, Nelson sees some of this education firsthand on the boat launch he uses.

“I know the signage at the launches are helpful that show invasive species and what to do,” Nelson said. “There could be some better ways to educate about what we do to manage it on our own.”

The Wisconsin DNR put a law in place to help prevent the spread of invasive species.

“This administrative rule makes it illegal to transport, transfer, possess, or introduce certain species that are likely to cause harm if introduced,” said Alison Mukulyuk, a graduate student with the UW-Madison Center for Limnology. “This rule helps to reduce the likelihood that an invasive species will be introduced.”

This law and public education efforts are the biggest tools for scientists and the DNR because once the invasive species get in, it is hard to get rid of them.

“We need to be very careful when moving from water body to water body — invasive species come in all forms, and some of them are not visible to our eyes,” Mukulyuk said.

Check out this timeline to see some of the important dates relating to invasive species in Wisconsin.