“I can recall a specific report on WTMJ-TV that was almost joking in its spirit,” Flemming said. “It was, ‘Hey, there’s been a run in diarrhea medicine at local pharmacies in Milwaukee!’ It was light hearted.”

It wasn’t until the following Monday that there were reports of significant absences in schools and the Milwaukee Health Department immediately began to investigate.

On that Wednesday, an answer was finally found. A hospital in West Allis identified the illness as cryptosporidiosis, a result of a parasite called cryptosporidium. 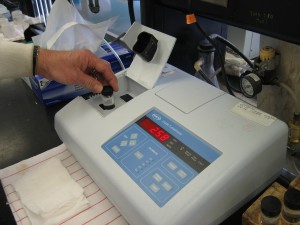 In 1993, Milwaukee, Wisconsin faced a contamination crisis that would go down as the largest waterborne outbreak in United States history. The Howard Avenue Water Purification Plant was contaminated. The treated water they produced demonstrated higher turbidity, or cloudiness, than what was considered normal.

For many public officials in Milwaukee, there was little to no information on what exactly cryptosporidium was or the severity of the effects. They eventually consulted with workers at the Milwaukee Health Department in order to understand the contamination and explain it to the rest of the city.

Cryptosporidium is a microscopic parasite known to cause a diarrheal disease called cryptosporidiosis. Both the parasite and the disease are known as crypto for short. There are various species of cryptosporidium that can harm humans and animals.

Water is the most common way for this infection to be spread and the disease itself is considered one of the most common causes of waterborne disease in humans in the US. The parasite can be found in every region of the US, and every part of the world.

Protected by a firm, hard shell, this disease can survive outside a body for long periods of time and cannot be treated with chlorine disinfection. When ingested, crypto will thrive in the intestine and can excrete millions of crypto parasites in their stool.  By simply coming in direct contact with any person or surface contaminated by the said stool, a person is at risk of being infected.

As soon as the city of Milwaukee found out that it was cryptosporidium infiltrating the water supply, Mayor John Norquist immediately announced a boil advisory.

“We were active in disseminating information to protect public health,” Flemming said. “We were aggressive and very public about determining the source of the infection and we were proactive in finding short and long term solutions to the problem.”