That’s how much water the average University of Wisconsin student comes into contact with in a day.

This figure may seem unbelievable, but think about it. Each day, students wake up, hop in the shower, throw on their shirt and jeans, guzzle a cup of coffee, down a bowl of cereal, load their textbooks and laptop in their backpacks and get on their way to class. 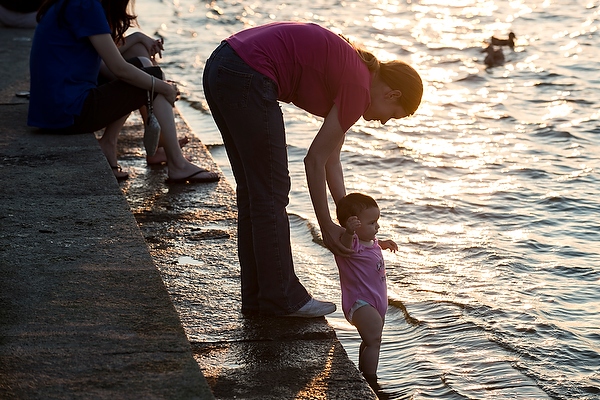 Every one of those activities leaves a “water footprint,” or a certain amount of freshwater used in its production.

Across the globe, the issue of water scarcity is a growing concern. Last summer, states along the West Coast saw a serious shortage.

But it hits close to home for Wisconsin residents too. In recent years, concerns arose about the drawdown rates—places where water levels drop due to pumping—in Madison’s aquifer, Amy Barrilleaux, Madison Water Utility spokesperson, said.

Margaret Weathers is a junior at UW studying mechanical engineering. She said she was shocked when she saw the figure.  So she laid out her daily routine and we lined up her habits with figures from water use study and several other online accessible resources.

As soon as she gets up, she brushes her teeth and takes a shower.

But that’s still direct use, which doesn’t even begin to break the surface on water usage.

Barrilleaux said the average Madisonian uses about 68.5 gallons daily, a drop from 73 gallons in the mid-2000s. She said about a third of this total comes from outdoor water use through sprinkler systems. Toilets alone contribute 28 percent of water use, she said.

Next, Margaret gets dressed. Typically, she’ll just wear jeans, a t-shirt and a pair of leather Sperry boat shoes. Producing only one item of clothing takes a lot of water to produce.

A study produced by Arjen Hoekstra and Mesfin Mekonnen, two researchers at the University of Twente in the Netherlands, analyzed the “water footprint” concept. At a national scale, a water footprint is defined as “the total volume of freshwater that is used to produce the goods and services consumed by people of that nation.”

Researchers broke down consumption into “water leaving and entering the country.” Those figures detail consumptive use and wastewater production.

The study links the idea of water footprints to the concept of virtual water.

Virtual water is the amount of water it takes to transport and produce the products people buy to maintain the habits they exhibit in their daily lives, Professor Marc Anderson, a UW environmental chemistry professor, said.

Anderson said one pair of Levi’s equals 3,000 gallons of water.

And that’s just one pair of jeans.

Weathers, said she owns about five pairs of jeans total.

When shown the figures she said, “That’s nuts! We should all go naked.”

While Margaret’s idea may not be feasible in subzero temperatures of Wisconsin winters, the numbers don’t lie.

Next, she makes herself some breakfast. If she’s in a hurry, she’ll just make some coffee and toast.

According to the study, one cup of coffee had a virtual water content of 36 gallons—think about how much water is required to maintain bean fields. And two slices of bread required 20 gallons—wheat production and shipment.

After she’s finished eating, she packs her backpack. She uses her laptop to take notes and each of classes has at least one required textbook.

Anderson also mentioned the concept of Water-Energy Nexus recently address by the U.S. Department of Energy. This concept applies to the relationship between water and the generation of electricity.

According to an article from the National Geographic, the average American uses about 671 gallons of water a day through use of electricity. They also calculated that if someone spends $1,500 per year on electronics, they’ll use 21 gallons of water per day. That’s the price of a MacBook Pro with Retina Display, according to the Apple website.

One sheet of paper takes 2.5 gallons of water to make, according to information from the OCWD. Margaret said her thermodynamics book has 995 pages. Under those calculations 2,500 gallons of water were used to make her textbook.

Margaret has a break between most of her classes and sometimes stops at The Sett to grab a burger, which takes about 634 gallons of water to produce, according to the study.

But let’s break that down.

Take, for example, the study’s analysis of beef production. At an industrial farm, the average cow produces about 440 pounds of beef once slaughtered. Each cow lives for three years reaching that point. In that time, it eats about 2,800 pounds of grains, 16,000 pounds of roughages through grazing. In addition, a cow consumes 6,340 gallons of water and requires about 1,800 gallons in servicing purposes. The total amount of water used to produce its feed alone is nearly 4,000,000 gallons of water.

These figures only skim the surface. Think about the packaging food comes in and where clothes are made—almost all Margaret’s clothes were made in China, she said. How much water does it take to make the mattresses people sleep on? Or all the buildings on campus?

Now, multiply it by 42,000, the number of students attending UW or take it a step further and multiply that on a yearly basis.

And if everyone lived like a UW student or at least like Margaret Weathers, multiply that by the population in the entire world.