x
by Megan Duncan
on February 19, 2015
under Culture
∞ Permalink

Spanning the southwest coast of Lake Mendota, bookended by suburbia on one end and student housing on the other, lies a 300-acre stretch of land inhabited by plant and animal. Here, paths trace shorelines and carve their way through woods and prairies a mere five-minute walk from bustling city life.

The Lakeshore Nature Preserve is a stretch of shoreline and wooded areas that branch out of and fill the University of Wisconsin-Madison’s westernmost areas. Pinched against Lake Mendota, the preserve spans one-fifth of the lake’s shoreline, dips dead logs in the lake’s waters and colors the lake’s ecosystem as only preserved habitat can. 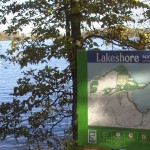 The shorelines of the preserve foster a relationship between land and water, where a terrestrial environment meets the freshwater environments of the lake. The way the land interacts with the water differs from elsewhere on the lake, where urbanization stunts that natural relationship.

According to Professor Emeritus John Magnuson, a retired professor from the Center for Limnology and the former president of the Friends of the Lakeshore Nature Preserve, it’s this unique relationship between the land and water that stands out along that naturalized stretch of shore.

“That shoreline area is [a place of natural transition] between freshwater environments and terrestrial environments,” Magnuson said. “There’s a lot of back and forth across that boundary.”

Magnuson, who served 18 years as the director for the Center for Limnology, emphasized the relationship between the lake and preserve, describing a shore-area food chain that flows from the preserve to the water. 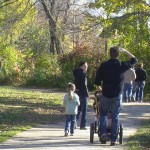 A family on a stroll through the preserve. Photo by Michael Frett.

According to Magnuson, lake ecosystems usually flow from algae to fish, but that cycle is different in the natural habitat around the Lakeshore Nature Preserve, where the leaves provide the initial spark in the food web. That web, the professor said, starts with the insects who eat the leaves scattered across the preserve. Smaller fish will eat those insects, who are, in turn, eaten by the bigger fish that take up residence among the fallen trees of the preserve.

“You’ll have research papers titled ‘Bass are made of maple leaves’,” Magnuson laughed about the chain.

Naturalized shorelines also offers a home for the fish, according to Magnuson, referencing studies that showed decreased fish populations in areas where wooded areas were removed. Common catches for fishermen, like yellow perch, would almost disappear without their adopted homes.

“The Lakeshore Nature Preserve is probably the single best thing going on for fish production in Lake Mendota,” said Steve Carpenter, a UW professor and another long-time researcher with the Center for Limnology. “There are a lot of logs that have fallen in the lake along the woods. That’s where the fish live.”

According to Carpenter, the Lakeshore Nature Preserve also supplies a stop for birds migrating south that most lakes couldn’t accommodate, such as the “hundreds of tundra swans” in University Bay or the rare canvasback ducks who eat plants found only in the preserve.

While the Lakeshore Nature Preserve provides a home for much of Lake Mendota’s wildlife, the wetlands and marshes of the preserve serve another purpose for a lake struggling with waters dirtied by pollutants: a buffer zone.

As hospital complexes being built near the lake require more road salt, the preserve keeps that salt from running into the lake, said Laura Wyatt, the university’s new program manager for the preserve.

According to a pamphlet released by the Environmental Protection Agency, excesses of salt can lead to waters becoming toxic, which could harm or kill aquatic life and upset a lake’s ecosystem.

Its proximity to the university means the preserve is regularly used by students and faculty. Faculty bring classes ranging from archeology to limnology out to the preserve, making use of what outreach specialist Bryn Scriver called “an outdoor laboratory.”

“These 300 acres are doing dual services,” Wyatt said of the research and education occurring on the preserve. “It provides an environmental benefit, but it also provides an opportunity for study.”

This opportunity could be found anywhere on the preserve, such as the regular sampling stations scattered across University Bay or the Korean kiln built near Eagle Heights.

University Bay is an inlet on Lake Mendota surrounded by preserve land. The Lakeshore Nature Preserve traces that shoreline as it heads towards Picnic Point, a popular destination on the preserve’s northern peninsula.

“I would say the main advantage we’ve seen with having the Lakeshore Nature Preserve there is the teaching advantage,” Carpenter said. “The opportunity to show students and the public what a natural lake shore looks like contrasted with an urbanized lake shore. [The opportunity] to introduce them to the problems with the lake and show them it right in front of their eyes. …  When I take people out in boats for demonstration trips, I usually take them to University Bay.” 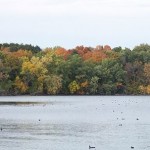 University Bay in the fall. Image courtesy of Wikipedia.

“[We] engage volunteers in meaningful activities that also help the preserve,” Scriver said. “We introduce them to the preserve. We tell them why their participation helps.” Scriver regularly leads volunteer groups into the preserve for invasive species removal.

The Lakeshore Nature Preserve is guided by the university’s master plan. In place since 2006, the master plan outlined a series of goals for the University of Wisconsin-Madison as a whole, and the preserve specifically. Under the master plan, everything from controlled burns to the Picnic Point renovations were mandated.

While the master plan placed the Lakeshore Nature Preserve under the university’s Division of Facilities Planning and Management, governing the preserve is left in the hands of the Lakeshore Nature Preserve Committee. The committee, made up of three students, three faculty members and three academic staff members, meets once a month to set policy and management goals for the preserve.

In the meantime, it’s up to people like Wyatt, Scriver and project coordinator Adam Gundlach to maintain the preserve and manage its resources.

For Gundlach, sometimes that means clearing brush off of burial mounds in Eagle Point Woods. Other times, it means facilitating that laboratory side of the preserve and ensuring that projects don’t take away from the communal resources.

And with the many programs and projects that find a home on the preserve, reconciling these projects has become one of the harder parts of managing the preserve.

“Every person who has a stake in this place has a different idea of what it is and what it should be,” said Gundlach. “So trying to bring all those different perspectives together – trying to bridge the gap between those ideas – is the main challenge we face.”

According to Wyatt, the university is currently working on updating the master plan, a task the Lakeshore Nature Preserve is looking to follow in suit by writing their own master plan in the coming years.

While that coming plan remains undecided, longtime volunteers on the preserve like Magnuson don’t see the preserve going anywhere, according to the professor emeritus. It may change – “Someone’s always making plans,” as Wyatt said of the future – but, according to Magnuson, the Lakeshore Nature Preserve, through master plans and devoted stewardship, seems to be guaranteed a place at UW-Madison.