It’s not a good sign when even the dogs won’t drink your tap water.

“They sniff it and then drink the bottled water we pour,” said Frank Michna of Caledonia, one of hundreds of southeastern Wisconsin residents whose wells are contaminated by pollutants that may be coming from buried coal ash. 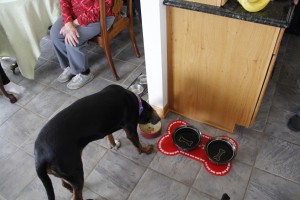 Cole Monka / Wisconsin Center for Investigative Journalism
Frank Michna’s dog, Sophie, refuses to drink water from the taps in his Caledonia home. Michna said the dog sniffs the tap water and then drinks instead from a bowl filled with bottled water. A study by the environmental advocacy group, Clean Wisconsin, linked pollution in Michna’s and hundreds of other wells to buried coal ash from the nearby We Energies Oak Creek Power Plant.

Michna’s well is tainted by boron and molybdenum. Molybdenum is a naturally occurring metal that can cause health problems such as gout, a complex and painful form of arthritis, if ingested at high levels. The chemical boron, also naturally occurring, has been shown to cause digestive problems and harm male reproductive organs.

The source of these and other contaminants in the wells could be coal ash from We Energies’ power plants, according to a study released in November by Clean Wisconsin, an environmental advocacy group. Much of the ash has been used as fill in construction projects under a program called “beneficial reuse,” endorsed by the state and federal government.

And it appears that Michna’s predicament in southeastern Wisconsin could be shared by other well owners throughout the state.  The EPA has confirmed 157 cases of proven or potential damage from coal ash, including 14 in Wisconsin, and says more will likely be discovered as required groundwater monitoring systems are installed.

In a long-awaited ruling, the U.S. Environmental Protection Agency on Dec. 19 labeled coal ash as nonhazardous waste, on the same level as household trash, and established stricter guidelines for disposal and monitoring of ash.

Ann Coakley, director of waste and materials management for the state Department of Natural Resources, said the state’s beneficial use rule, passed in 1985 and praised in the new federal coal ash regulations, puts Wisconsin ahead of states such as Tennessee and Kentucky that have weaker rules.

“For us, we already regulate coal ash as a solid waste,” Coakley said. “This will not be a big change for us.”

The federal rule was largely sparked by the failure of large coal ash storage ponds, especially in southern states. But the rule has implications for Wisconsin because of the volume of ash that is used in construction projects. Those uses will continue to be allowed under the new rule, Coakley said, though there may be some additional restrictions on weight and other aspects of use in building and road construction.

Yet Wisconsin’s contaminated wells raise the possibility that the ash can be far from benign. 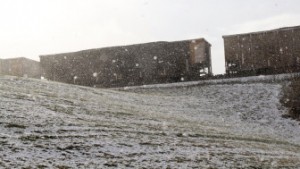 Cole Monka / Wisconsin Center for Investigative Journalism
Snow dapples uncovered coal cars in Caledonia, an area where many wells have been contaminated with molybdenum.

Regardless of what happens in the wake of the new federal regulations, millions of tons of coal ash have already been buried beneath Wisconsin’s landscape. The coal ash, material that is left after coal is burned for fuel, contains concentrated levels of hazardous substances such as boron, molybdenum, chromium, lead, arsenic and mercury.

Tyson Cook, director of science and research for Clean Wisconsin, said the group focused its study on southeastern Wisconsin because of the availability of data. But coal ash is everywhere, he added, and so may be pollution from that ash.

“There’s no reason to think that it is limited to that area,” Cook said. “It just happened to be where we were looking. In fact, we know that utilities across the state have been selling or giving away their coal ash for these types of uses.”

Coal ash varies a lot. It may be fly ash, fine, gray, talcum-powdery particles that rise with exhaust gases and are captured in chimneys; bottom ash, dark gray leftover material that collects in the furnace; boiler slag, a crystalline material from molten bottom ash and also known as “black beauty”; or sludge, a solid material that forms in a furnace when scrubbers remove sulfur dioxide from exhaust.

The ash is used for concrete, asphalt, wallboard and construction fill in buildings and highways. Contaminants from loose, or unencapsulated, ash can more easily leach into groundwater. In its new rule, the EPA cited the potential risk of using unencapsulated ash but stopped short of requiring more regulation of such uses.

Cook’s group found that, of the 1,000 wells studied in southeastern Wisconsin, 45 percent showed levels above the DNR enforcement standard of 40 parts per billion, and of those about half also tested above the state health standard of 90 ppb. The Wisconsin Department of Health advises that water with levels at or above 90 ppb not be used for drinking or cooking.

The closer the wells were to coal ash reuse sites, the higher the molybdenum levels, according to the study. The same was true of arsenic.

The DNR disputes the report’s findings, noting “significant shortcomings” in a formal response. Coakley said the Clean Wisconsin study relied on too little data from too large an area to definitively blame coal ash.

“The department does not concur that there is a clear correlation between the elevated molybdenum in groundwater in southeast Wisconsin and the beneficial use of ash from coal-fired power plants,” said the agency’s response to Cook and Clean Wisconsin.

In 2013, the DNR investigated molybdenum contamination in 24 area wells but found evidence linking the pollution to coal ash “inconclusive.”

State not tracking fate of ash

Record keeping for beneficial reuse is spotty, so it is unclear how much Wisconsin ash has been disposed of in loose form. The state does not require coal-burning utilities to disclose where and how they beneficially reuse much of their coal ash. Plus, what records of disposal activity do exist are not around long; Steve Kraus, a spokesman for Madison Gas & Electric, said utilities are only required to keep records for five years.

The Clean Wisconsin report cited studies from the EPA and elsewhere that showed, nationwide, more than 26 million tons of coal ash was disposed of in unencapsulated form in 2012.

Coakley said the DNR does not keep records on whether reused coal ash is encapsulated or loose at specific sites.

A school with bad water

Loose fill may be connected with undrinkable water at the Yorkville Elementary School in Racine County, according to the Clean Wisconsin report.

School District Administrator David Alexander said the DNR asked the school to test its well water in 2013. Those tests turned up high levels of molybdenum — 138 parts per billion, above the state’s 90 ppb health advisory level. The EPA says children should not drink water for even a single day from wells with more than 80 ppb of molybdenum.

We Energies records showed 856 tons of bottom ash had been used as fill at the school in a construction project, Clean Wisconsin found.

Now, water fountains at the school are criss-crossed by blue tape to keep students from using them. Alexander said it costs about $8,500 a year for the district to supply the school with bottled water. Culligan water coolers are placed in the hallways. Tap water is not used to prepare food in the kitchen.

“It seems like you’d have to drink liters and liters and liters per day in order for it to cause much of a health concern at the concentrations that we have here, but nonetheless, we’ve just decided it’s the prudent thing to do.” Alexander said.

Before coal ash was regulated in Wisconsin, utilities legally dumped tons of the material in empty lots, waterways, landfills and other places. 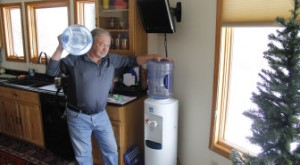 Cole Monka / Wisconsin Center for Investigative Journalism
Frank Michna buys bottled water for drinking and cooking in his Caledonia home because of high levels of molybdenum and boron in his well.

Most of Madison’s Isthmus, between Lake Mendota and Lake Monona, is built upon coal ash from the Madison Gas & Electric Blount Street plant and other sources, such as Oscar Mayer. Ash lies under many parks and athletic fields and even beneath a St. Mary’s Hospital parking lot that was once a dump.

Though no molybdenum has been found in city wells, the metal chromium-6, also found in coal ash, has been discovered at low levels. Utility officials believe the metal is naturally occurring and not from ash.

Most of what was reused went into concrete and asphalt, which does not leach as easily into groundwater. The remaining 21,000 tons went toward mine reclamation, fill, soil stabilization and other uses.

About 17 percent of all the coal ash produced by the company in both Iowa and Wisconsin goes into landfills or coal ash ponds where the ash is stored as a sludge or slurry, Reigstad said.

The EPA has documented failures in coal ash storage, including the 140,000-ton February coal ash spill into North Carolina’s Dan River from an impoundment owned by Duke Energies.

Steve Jackson, Alliant’s manager for environmental services and planning, said the pond was cleaned up and capped, and no pollution problems have been reported since.

Alliant’s two active Wisconsin landfills, one at the Edgewater plant near Sheboygan and the other at the Columbia plant near Portage, have liners and leachate collection systems. He added, however, that an older section of the Sheboygan pond remains unlined. He said groundwater monitoring near the landfills has not detected molybdenum at levels exceeding health standards.

Michna, whose contaminated well is not far from the We Energies Oak Creek plant, is wary of coal ash storage areas. He remembers the day in 2011 when 25,000 tons of ash collapsed from the company’s massive storage site on the shore of Lake Michigan. The company had filled a ravine with coal ash in the 1950s, before state regulations were passed.

Despite the DNR’s critiques of the Clean Wisconsin report, Coakley said the agency would be especially interested in learning more about the connection of coal ash to molybdenum contamination.  The issue, she said, is not likely to go away. 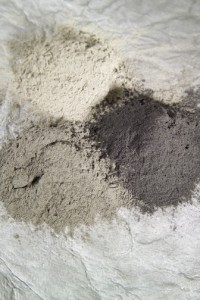 She added, however, that it is unlikely the agency will conduct those studies on its own because of its tight budget. The DNR is instead interested in collaborating with a research institution that can take the lead on such studies, Coakley added.

But Michna said it is beyond the time for studies.

Michna thought he was safe from contaminants after he sank a new 300-foot well in 2007 at his Racine County home. But several years later, he and his family started suffering from mysterious illnesses.

“My health went down and I got gout,” Michna said. “I had gout and I could hardly walk. I got special insoles.”

Michna also said he experienced gastrointestinal problems, which he believes may be connected to the boron in his water.

Boron showed up at 1,850 parts per billion, above the state enforcement standard of 1,000.

Molybdenum appeared at 27 ppb, below the state standard of 40.

Now, the Michnas buy five bottles of water a month for their drinking water. They installed a $3,000 filtered water softener.